We can rename columns in our results table using the AS keyword. In this way we are not limited to directly copying the names of the columns from the tables. For example, when we select just the “red” objects we can rename the column in the results to reflect that:

It is good practice to follow the same conventions one would in naming columns: using lowercase and connecting words with underscores.

In this module we’re going to learn how to work with columns of data. Aggregate functions “collapse” the values in a column, returning a result. The functions go into the SELECT part.

One of the simplest is to add together all the of the values using SUM. This figure shows part of the tickets table from our class_music_festival database.

If we wanted to know the total of the values in the tickets.price column we can get that with the three steps below.

Which would give us a result of

When we use an aggregate function it is convenient to employ an alias to give a name to the result:

There are a set of these functions that we can apply: SUM for addition,AVG for the average of the numbers in the column. There are also the MIN for minimum, MAX for maximum, but be wary of those (more on that below). 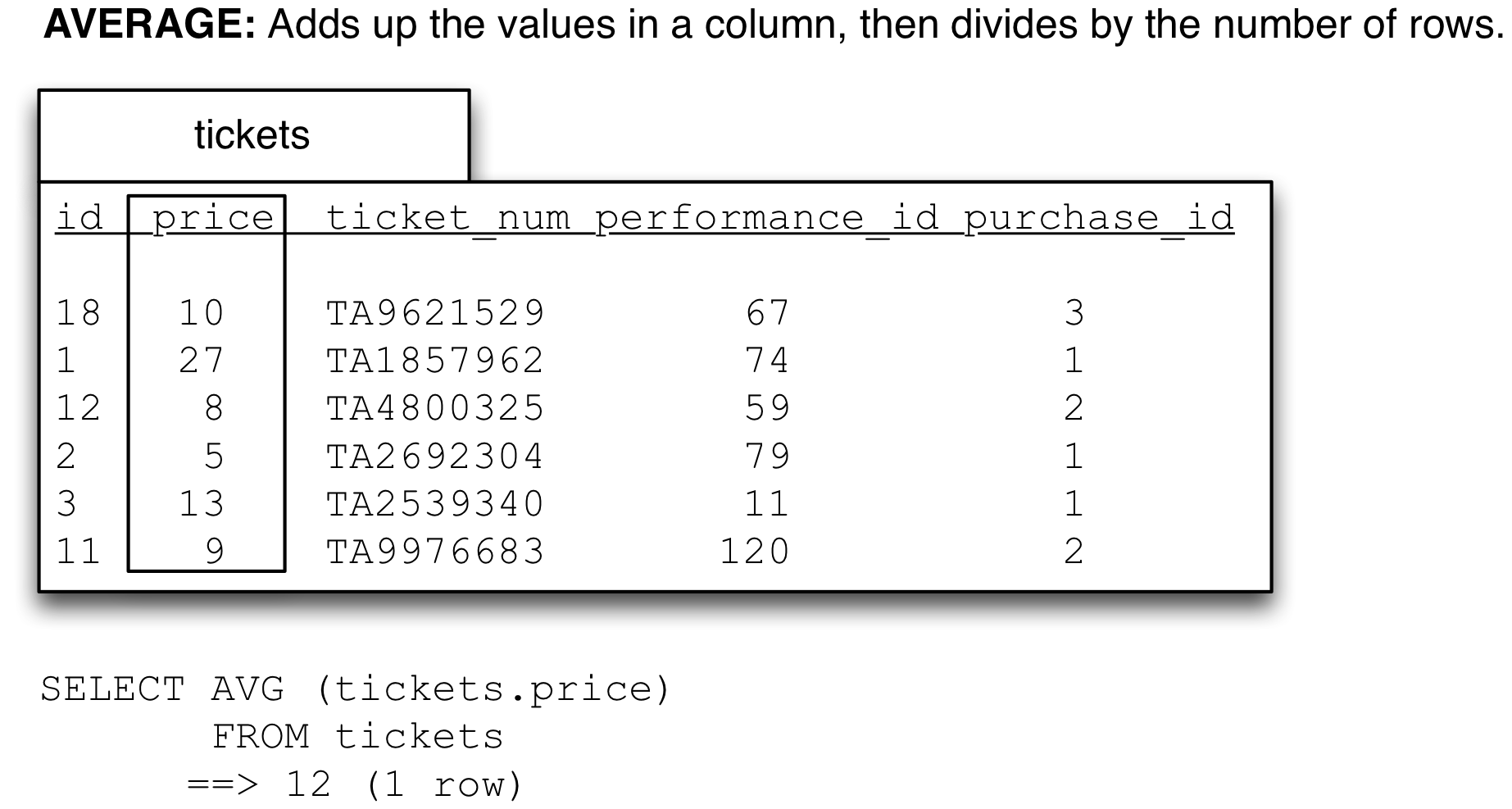 Note that there is no MEDIAN function nor a MODE function in sql. Both can be done but it is complicated and once one is doing real statistics it is better to move out of SQL and use python (or R).

Another useful function is DISTINCT which reduces the column by removing duplicates. Unlike other aggregation functions DISTINCT does not use parens.

Counting values in a column (or rows in a table) is an important form of aggregation function. At first you might not think of that as aggregating, but it does take a column (or a table) and reduce it down to a single value, just as functions like SUM or AVG do.

There are three forms of COUNT, each subtly different from each other.

The three forms of COUNT are:

COUNT(*) can be useful for simple tables:

Or used with data conditions to count the number of things that meet some condition, such as how many bands had fees higher than $100?

You almost always want to use an AS alias with COUNT(*).

COUNT(*) is also useful after joins. For example, one can find the number of performances at the “BMI” venue:

COUNT(DISTINCT column) is also very useful. For example, counting the number of bands that play at the BMI venue. As above you have to join to performances to ensure that a performance took place, but given that bands might play more than one performance you could end up with more than one row for each band. DISTINCT helps resolve that.

Generally speaking counting rows or distinct ids is a better approach than counting distinct names because many things in the world can have the same name (as the Office Space movie, filmed in Austin, showed us memorably about ‘Michael Bolton’.)

To reiterate, consider the differences between the three forms of COUNT on this list:

I advise people to avoid COUNT(column) because I find the semantics confusing in a query. I mean that what people are intending to accomplish is unclear. More, though, I haven’t come across a time when it is necessary.

Whenever you are tempted to use COUNT(column), ask yourself whether COUNT(*) is clearer and what you actually mean. Most counting queries are questions about the number of rows (after some conditions/joins), not the number of non-NULL values.

ps. I’m very interested to find an example where COUNT(column) is the ideal thing, so please email me if you see one. Only thing I can think of is something like counting records with relationships. e.g. a table like people(id, name, sig_other_id) where those not in a relationship have NULL for their sig_other_id.

But I think even that would be much clearer as:

A note about MIN and MAX vs ORDER BY LIMIT 1

The aggregate functions MIN() and MAX() seem straight forward, the find the minimum or maximum value in a column.

Which will, correctly, return 5, the lowest value in the table.

However questions about the “lowest”, “highest”, “earliest” usually also want another part of the row with that value. e.g., “Who bought the earliest ticket?”, “which ticket number had the lowest price?”

These queries are better answered using ORDER BY and LIMIT 1. Using MIN and MAX the intuitive way will silently give a totally incorrect answer. 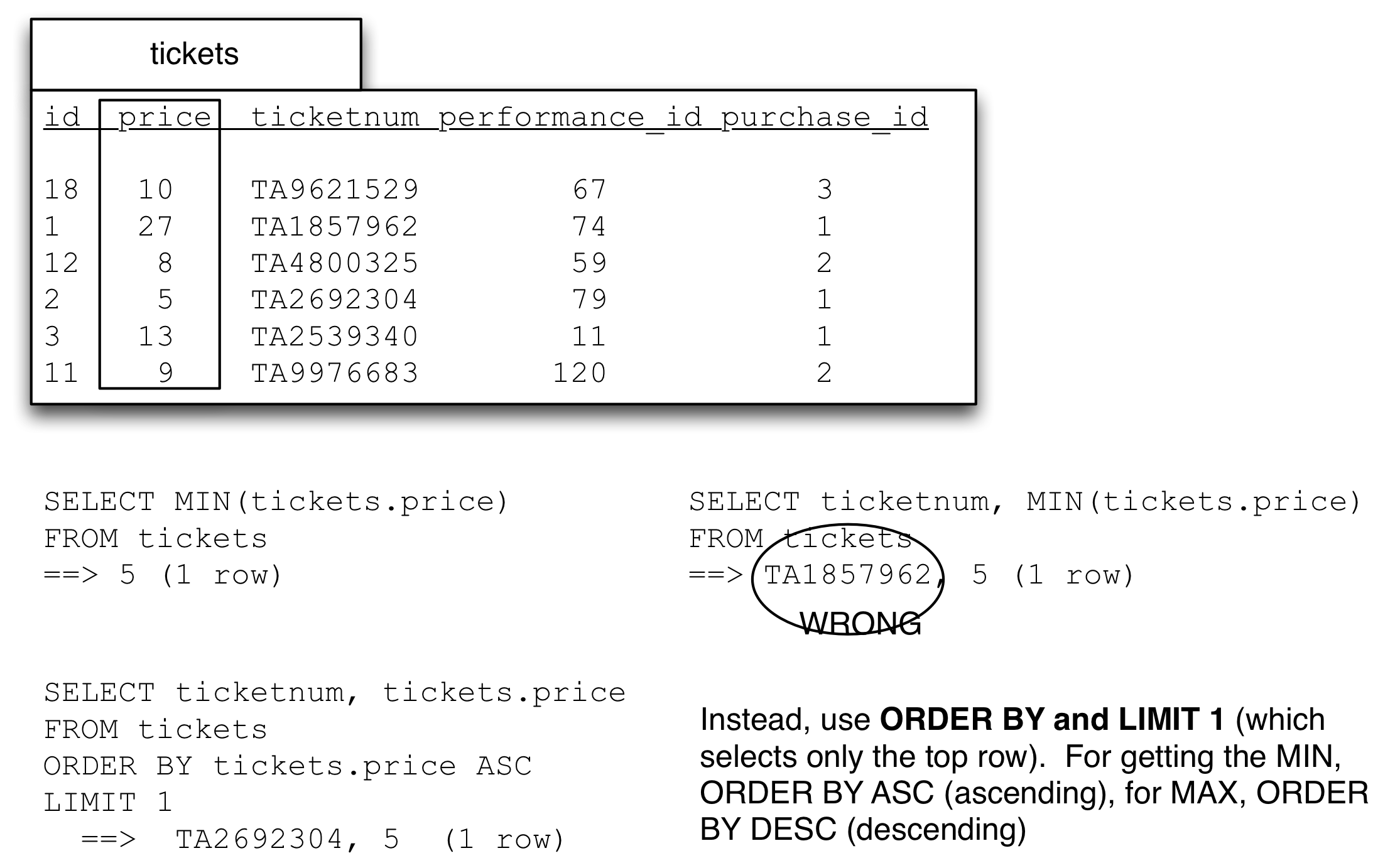 This bears repeating: If you use MIN or MAX in the SELECT clause with any other column you will not get the value in the row that had the lowest value, you will get a random value from the other column. I know that this is hard to believe. We’ll talk about why when we get to groups.

While you should use ORDER BY and LIMIT 1, you can use MIN or MAX but you have to use it via IN (or a sub-query). Here think of the question as two steps: “What is the minimum price? And what the ticketnumbers and prices for those tickets which had that price?”

But hey if you use ORDER BY and LIMIT you can easily get the top five or bottom whatever (as long as ties don’t matter), so just don’t use MIN or MAX in the SELECT clause, unless it’s a sub-query.

I would only use MIN or MAX when ties really matter, and only in a sub-query.

You may find the first five exercises on SUM and COUNT on SQLZoo useful.